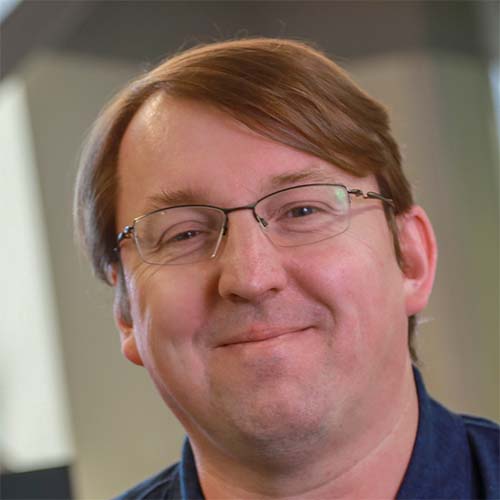 Dr. Reiners was born and raised in Bergisch Gladbach, a small town right next to Cologne, Germany. Dr. Reiners did undergrad work at the Friedrich-Alexander University Erlangen-Nuernberg, but because they didn’t have a computer graphics program he changed to the Technical University Darmstadt for his graduate work. While there he worked as an RA in the Department for Virtual and Augmented Reality of the Fraunhofer Institute for Computer Graphics.

Dr. Reiner’s work has focused on software systems for Virtual Reality applications, primarily rendering systems. His master’s thesis work has a rendering system aptly called “Y” (the logical consequence after “X”, and a good name all in itself). It was used as the basis for most of IGD’s Virtual Reality projects and later commercialized by vrcom, a spin-off from IGD.

One of the main problems with Y was its tight relation to Unix and X. Many people were asking for a Windows port, which he really wasn’t looking forward to, so he waited and hoped for a commercial system to come to our rescue. But after SGI canceled the cooperation with Microsoft on the Fahrenheit project in late 1999 it become obvious that there was no chance of getting another modern scenegraph out of the commercial sector. Thus a new project was started, trying to build a modern, Open Source scenegraph system that would satisfy his needs, run on Windows and all the relevant Unix platforms, and be flexible and extensible enough to handle all the great new features that the graphics hardware manufacturers starting throwing at him. OpenSG® was born. Working on OpenSG® on the development side, getting funding for its development, through the OpenSG® Forum and the OpenSG® Plus project has taken up most of his time since then. Just slightly interrupted by getting the HEyeWall off the ground. Dr. Reiners didn’t get to see it finished, because shortly before that happened he left for Iowa State University in 2003.

Dr. Reiners stayed there for 3 years before moving to the University of Louisiana, Lafayette.  The main pull to get him there was the Louisiana Immersive Technologies Center, which features a pretty unique combination of supercomputing and visualization that looked like it has great potential for interesting research. As it turns out, that is true.

However, sometimes the grass really is greener on the other side, and after a lot of consideration in the summer of 2014, he moved to the University of Arkansas at Little Rock in the Department of Information Science. The main reason for the move was the great environment and the Emerging Analytics Center, which is where he spent most of his time.

Besides working on rendering systems Dr. Reiners also worked on some of IGD’s early Augmented Reality efforts, culminating in the Arvika project. He is still somewhat involved in the AR community, his latest task was being the Workshops Chair at ISMAR 2014. On a slightly less technical note, he also spent a wonderful summer at Advanced Telecommunications Research Institute International in Takanohara, Japan, working with Christa Sommerer and Laurent Mignonneau on an exhibit piece for the SIGGRAPH 1996 art show, IntroACT & MIC Exploration Space.