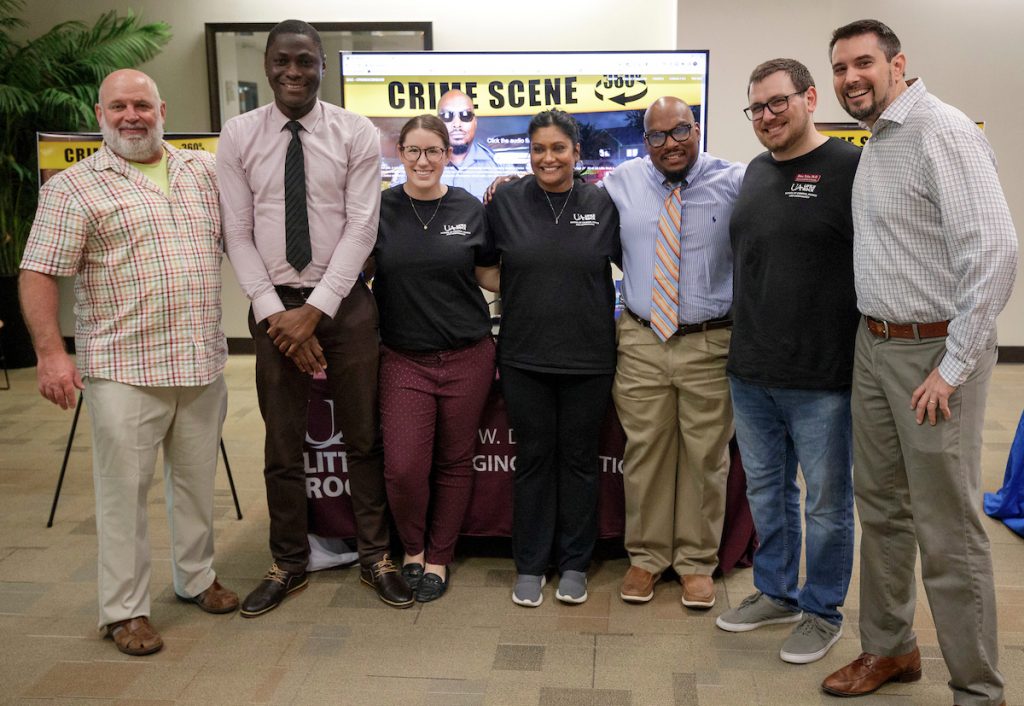 The University of Arkansas at Little Rock has created a new app featuring a virtual “Who Done It” mystery that will spark interest in criminal justice education and investigative work.

The interactive virtual reality crime scene app, CrimeScene 360, was created through a collaboration between the School of Criminal Justice and Criminology and the Emerging Analytics Center.

“The faculty in the School of Criminal Justice and Criminology has been brainstorming innovative ways to teach students content and skills in the classroom,” said Director Tusty ten Bensel. “With the advancements in technology, we want to meet our students where they are today in regard to their interest in gaming and virtual reality. Our partnership with EAC has been wonderful. The SCJC and EAC team collaborated and produced a crime scene investigation app that I think students will really get into and be able to learn from. We are excited to use these types of apps in the classroom to engage our students in content and work on skills that they will need in their future careers.”

The app takes you through the initial investigation as Officer Williams responds to a 911 call reporting a death at an apartment complex. A group of friends at a Super Bowl party have found their friend dead in the bathroom, and it’s up to you to solve the mystery. The app takes players through the initial investigation, including the 911 call, interviews with witnesses, and evidence collection.

Once players are through investigating, they fill out a police report with their conclusions on what happened during the Super Bowl party and identify the cause of death as a murder, accident, or suicide.

“Officers respond to reports of dead bodies often throughout their career,” said Dr. David Tyler, assistant professor of criminal justice. “So much of our exposure to how crime works is based on ‘Law and Order’ and ‘CSI’ type shows, and it gives us an inaccurate view of how this works. We really wanted this app to fit into the realism category while still being a fun and engaging exercise in investigative work.”

The specific scenario draws from a variety of sources, including a student’s time as an officer, field notes from an observational study Tyler completed, and some informal conversations with current and former law enforcement officers.

Justin Williams, a criminal justice graduate student, serves as the real-life inspiration for Officer Williams, the responding officer in CrimeScene 360. Some of the elements in the game are drawn from his 14 years’ experience as a police officer and state trooper.

“At first I didn’t realize that I would be the face of the game,” Williams said. “It’s so surreal. This serves as an embodiment of everything I went through as a law enforcement officer. Even the Dodge Charger in the app looks just like the car I had.”

CrimeScene 360 has already been tested during classes and career fairs, and the creators say the game has been a success.

“When you are exhibiting the app, you realize it has a lot of depth,” said Tom Coffin, senior visualization manager at the Emerging Analytics Center. “People are very engaged with this. A lot of educational curriculums are moving to enhance their programs with interactive apps like this that include augmented reality, virtual reality, and mixed reality.”

A Match Made in Heaven

Tyler got the idea for CrimeScene 360 from a mock crime scene event the university put on in 2017 with the Little Rock Police Department. The successful event, “CSI: UA Little Rock,” brought together the public to work with the LRPD Crime Scene Search Unit to analyze the crime scene, identify suspects, and solve the mystery of who committed the crime.

“We were looking for a way to replicate this fun event and make it portable so we could bring it into the classroom and to recruitment and community events,” Tyler said. “There is a pretty big difference between me standing in front of a classroom and describing a typical officer response. That’s not the same as the virtual experience of getting the information an officer would typically get, looking around, and seeing what you might actually encounter on this type of call. Having that individual experience and immersion drives home the reality of the job.”

A team of criminal justice professors and students led content development efforts for CrimeScene 360. They created the investigation scenario, the storyline and narrative elements, and provided the evidence. Professors Tyler and Tusty ten Bensel and students Dana Fachner Tyler, Darlynton Adegor, and Williams served as actors who played the witnesses from the Super Bowl party.

“We wanted to make this an interactive experience,” said Jason Zak, lead artist at the Emerging Analytics Center. “We took the criminal justice vision and ran with it to complete their goal.”

Fachner Tyler, who came up with the crime scene layout for the app, said the collaboration between criminal justice academics and EAC was a perfect fit.

“It all started with this sketch of a crime scene, and the EAC brought it to life,” Fachner Tyler said. “We have subject matter knowledge, and the EAC took their background in art, gaming, and programming. It all came together in this perfect union.”

The free app is available at https://eac-ualr.org/CrimeScene360/. 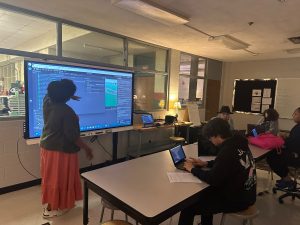 On January 17 and 18, juniors and seniors from the Little Rock School district participated in a video game development workshop at the Metropolitan Career-Technical

A University of Arkansas at Little Rock and EAC team member, Andrew Bomberger, was recently named “Arkansan of the Day” by THV11 News. View that

A UA Little Rock student has earned his master’s degree after advancing cybersecurity education for hundreds of students and teachers throughout Arkansas. Andrew Bomberger, of